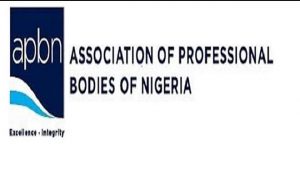 The Association of Professional Bodies of Nigeria (APBN) has rejected moves by the National Assembly to establish the Chartered Institute of Forensic and Investigative  Professionals of Nigeria (CIFIPN), describing it as suspicious and a violation of the rights of professionals in the country. The APBN, which is the umbrella body of Professional bodies in Nigeria, said in a statement by its publicity Secretary, Sam Akanbi that the Association will resist  the ‘spurious bill’ because it will, at best, create confusion within the sector.

The statement quoted the Association’s President/Chairman of Board and Council, Engr. (Chief) Olumuyiwa Alade Ajibola, as saying that the urgency with which the bill was being pushed in the House, raised much suspicion.

He said: “The basis of this extra-ordinary urgency in processing this bill is anything but suspicious. Each professional body is reminded to note that the passage will neither be in its interest nor in that of the general public.

“Sections 9 and 10 of this bill show that there is no identifiable and recognized University learning curriculum for the acquisition of the knowledge being proposed to be ware-housed in this institution. Thus, it can only result in unfair usurpation of the rights of the existing  professions,” the APBN boss stated.

While calling members of the association to resist the ‘spurious’ and ‘baseless’ institute, Chief Ajibola argued that the body being created would only infringe on the rights of each of the professional bodies when passed into Law. He therefore, called on members to act decisively in stopping the passage of the bill by promptly appealing and sensitising their Honorable Member of the House to be wary of the Bill passage as presented.