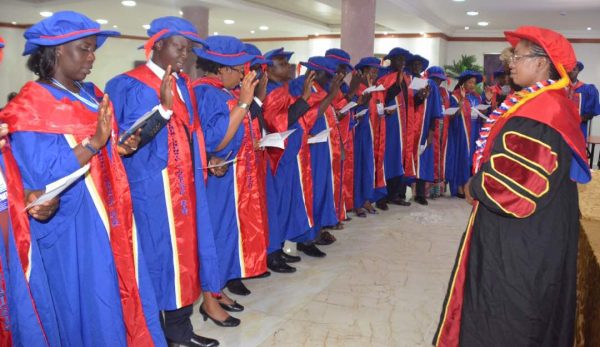 FILE PHOTO: Cross-section of Inductees of Charted Institute of Forensic and Investigative Auditors of Nigeria (CIFIAN) taking oath before the Pro-tem President of CIFIAN, Dr Victoria Enape, during the closing ceremony of CIFIAN Pre-Training and Induction of new members in Abuja.

The Chartered Institute of Forensic and Investigative Auditors of Nigeria (CIFIA) has urged the House of Representatives to speed up the process of concurrence on the CIFIA Bill in order to boost the fight against corruption in Nigeria.

CIFIA’s Chief promoter, Dr Victoria Enape, made the appeal at the induction/ training of new members in Abuja, with the theme “Transition to Forensic and Investigative Audit.”

She advised the Federal Government to embrace the current trend of forensic and investigative auditing to revamp the nation’s economy and check fraudulent practices.

Enape added that if the Bill was enacted, it would help position forensic fellows in various organisations and agencies to check illicit financial flow in the country.

The Bill for an Act to establish the Chartered Institute of Forensic and Investigative Auditors of Nigeria was jointly sponsored by Sen. Ahmed Lawan, the Senate Majority Leader and Sen. Andy Uba.

The Bill has been passed by the Senate and waits concurrence by the lower chamber before transmission to the president for assent.

“Our appeal is that the Bill should be given speedy concurrence at the House of Representatives, so that it can be moved to the president for assent.

“After presidential assent, we will be able to do anything Nigeria wants us to do to assist in ensuring prevention of fraud.’’